We started the day with our first Scottish breakfast - it's just the right way to start the day. We had to say goodbye to our roomie Patrick at this point as he was taking a different route to Fort Augustus. Ian and Sasha gave us some good last minute advice and sent us on our way around 8:30.

First off was a steep climb up to Bealach Fēith na Gamhna. From here we walked off trail for about 3 km along Allt na Muic. This is where Ian's good advice came in - he told us to stay right on the banks of the river where there would be hard dear paths. This made a world of difference and probably saved us at least an hour and near certain exhaustion had we just taken a straight line through the bog and heather that we love so much. 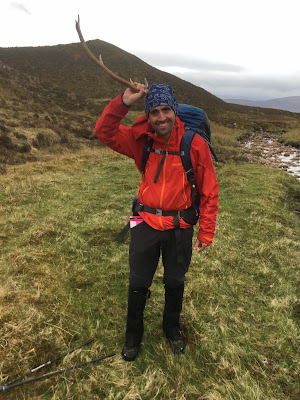 Next there was about 5 km of back road which was a nice change of pace. 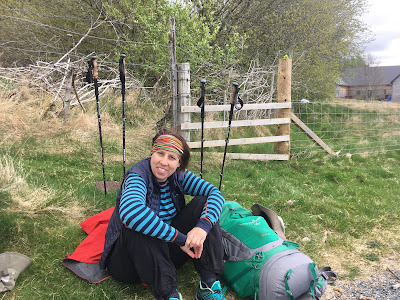 We met two brothers, Pete and Rich, from England about 6 km from the end. They were kind enough to slow down enough for us to just keep up, which helped us finish sooner than we would have. We had a fun conversation and ended up joining them at the Lock Inn for a pint on the way into town. We then grabbed groceries, dinner, and headed to our B&B where we are now resting. Fort Augustus is a very cute little Scottish town on the south end of Loch Ness. In case anybody was wondering we did see Nessie. 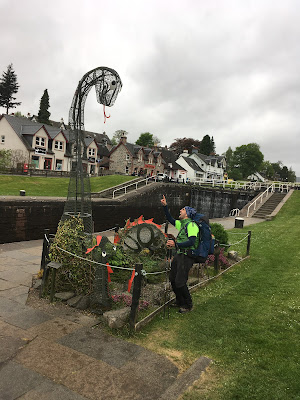 It has been a luxurious night with hot showers, clean laundry, and a cupcake each left in our room.

Grandma might not want to read the next part..... I found two ticks around my waist at shower time. It was kind of gross but glad I found them before they were engorged. (Kirsten, Mandy said we should put them into a Ziploc to bring home, but there is no way I am carrying those two little critters the rest of the way across Scotland!). We did a quick check for each other and that seems to be it - hopefully for the rest of the trip also!!!!

Tomorrow will be our most ascent in one day, 990 m over the Corrieyairack Pass. We'll be in a tent again tomorrow night and will have limited service for a couple of days. Keep sending it out to the universe for good weather, and no ticks!! Thanks everybody!
Posted by Jossinet - McGuire Clan at 14:30