What can I say about today? It was definitely one of ups and downs. We tested ourselves, but did manage to get where we had planned by the end of the day. A sunny evening, big meal, and a few conversations around the campsite seems to have made things better.
We were a little slow getting out of camp this morning, hitting the road just before 9:00. The first part of the hike was quite enjoyable, even though we had to do a little unexpected route finding. Our planned off-route went well with firm ground and little bog. 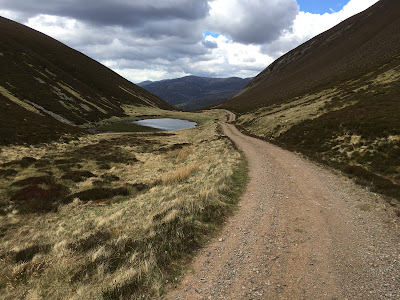 The next section was where we ran into trouble. We needed to cross River Tromie, and had two bridge options. The first option ended up being washed out. We decided to head down river for the second option, despite the trail we needed being 20 m away on the other side. We should have forded. An hour and a mountain of exertion later we still weren't at the second bridge. We decided to ford at that point. Pretty frustrated we continued on. A few minutes later we passed the point where we would have crossed the bridge and found out from some other hikers that it was out also, so we had been wasting our time anyways. Aggggggg!! After that point we were not in a good frame of mind and it made the walking very tough.
Thankfully the hiking gods took mercy on us and sent James, another Challenger. We followed him over a mountain that saved us a couple of kilometres and he dragged us the last nine thanks to some good conversation. 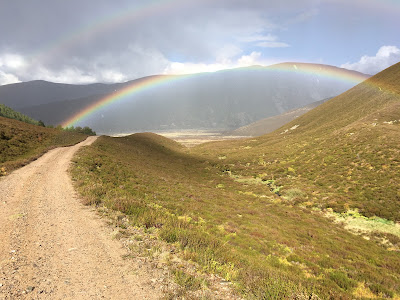 Tonight we have regrouped at our camping spot. Two of the three Bothy crew are here - Amanda and them waited for Nigel until about 9:00 but he must have stopped short. Barry, also from Melgarve Bothy Night, gave us some prime real estate right next to his tent to pitch our own. We ended up cooking and eating at the same time and had a very nice time chatting and joking around.
We are debating our route tomorrow and might decide to stick low in order to recover and keep our sanity. It's getting chilly and I am tired so that's it for tonight. Thanks everybody!
Posted by Jossinet - McGuire Clan at 07:09